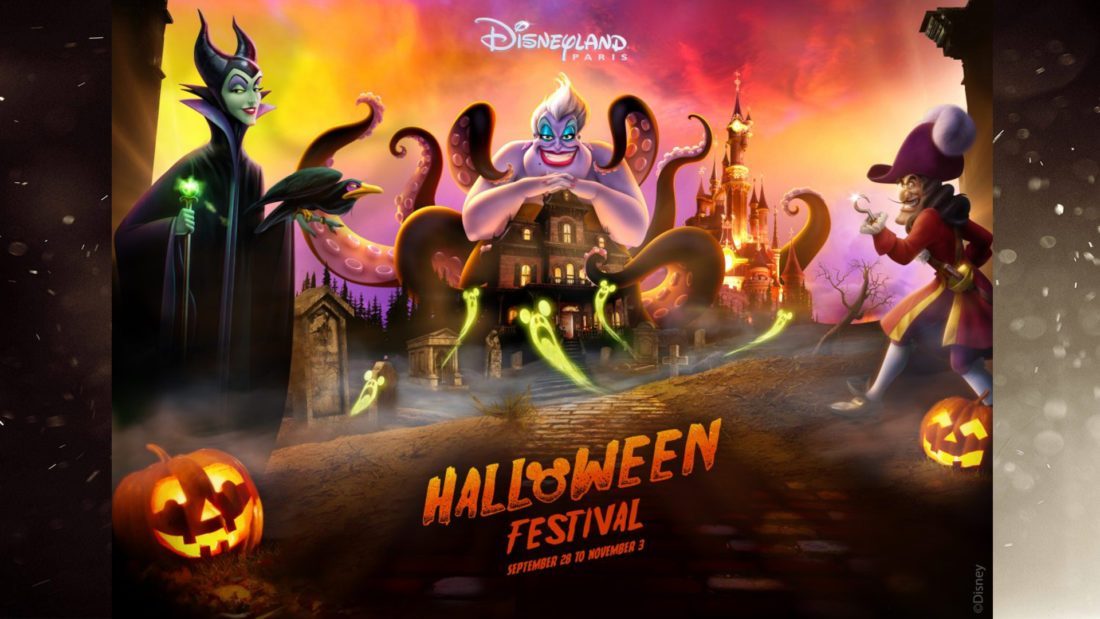 A New Show Starring Disney Villains
Disney Villains always have a few surprises in store for guests in the Halloween season, and this year they will be joined in a new show by Ursula, the devilish sea witch. Mickey and Friends will be there too: they’ll be a hint of evil about them too for guests who dare to brave them.

Celebrating Halloween with Mickey and Friends
Mickey and Minnie will be up to their mischievous tricks at Disneyland Paris, taking part in the “Mickey’s Halloween Party” cavalcade with Donald, his nephews Huey, Dewey and Louie, Daisy, the Three Little Pigs and many more of your favourite characters. Guests can see the “Mickey’s Illusion Manor” again, plus Mélanie Ravenswood in her wedding dress and the zombies from Phantom Manor.

Lots of Disney characters will be wearing their best Halloween costumes to pose for photos with guests, who can meet Minnie, Stitch and Max (Goofy’s son) in their new costumes and the Cheshire Cat from Alice in Wonderland.

Attractions even more scary for the Halloween festivities
Guests who like a bit of a fright can put their courage to the test at Phantom Manor: the iconic attraction at Disneyland Paris, which has re-opened after the biggest renovation project in its history. There are plenty of surprises in store for guests on this mysterious and fascinating tour, watch out for ghosts and spirits at every turn!

Fans of thrills and spills will enjoy the new version of The Twilight Zone Tower of Terror, the top attraction at Walt Disney Studios and a scene of breath-taking drama.

Immersive sets for that spooky, Halloween feeling
The spirit of Halloween will take hold of Disneyland Paris, from Main Street, U.S.A. to Sleeping Beauty Castle. Pumpkins and ghosts will be floating around to amuse guests in a wickedly colourful atmosphere to suit the season.
​
About Disneyland Paris:
Euro Disney Associés S.A.S, operating company of Disneyland Paris has 16 000 employees, 500 professions, 20 spoken languages and 121 nationalities. Disneyland Paris is the number one single-site employer in France and the largest private employer in the department of Seine-et-Marne.

The Resort includes Disneyland® park, Walt Disney Studios® park, six Disney Hotels and 2 Disney Nature Resorts with a total capacity of more than 5,800 rooms, two convention centers, the entertainment center Disney Village® and a 27-hole golf course. In addition, the company manages the real estate development operating segment of a 2,230-hectare site, approximately 50% of which is yet to be developed.

​A 2 billion-euro, multi-year new development plan includes a transformation of the Walt Disney Studios Park, adding three new areas that are based on Marvel, Frozen and Star Wars, along with multiple new attractions and live entertainment experiences. The expansion plan is one of the most ambitious development projects at Disneyland Paris since its opening in 1992.